The first hotel built was just across the bridge on the left hand side, and is now a private dwelling. Thomas Greaves built the Willaston Hotel in 1849 and also established a camping ground for mule teams from the Burra Mines, alongside. Travellers in drays, carts and wagons stopped here for a rest, to stable their animals and to collect further provisions.

The explorer John McKinlay, charged with instructions from the Government to provide relief for the missing Burke and Wills expedition, left from the Willaston Hotel in August 1861.

It was reported that it was a ‘convivial send off’ by the new owner of the hotel, Mr R.T. Poole, whose son Bobby formed one of McKinlay’s search party. Apparently there was a champagne breakfast before departure. Mr. Poole also supplied the party with 200 pounds of bacon. McKinlay found the grave of Burke and others of his party near Cooper’s Creek and then launched off on an epic exploration himself in search of grazing country. In his search he named “Poole’s Creek” after the Mr. Poole of Willaston. McKinlay retired to Gawler, and died in 1872. He is buried in the Willaston Cemetery.

The Willaston Hotel has an association with another explorer, John McDouall Stuart. His final expedition, to find a way from the south to the north of Australia, left Adelaide on 26th October, 1861. He and his party reached the Indian Ocean on 25th July 1862. On their return, the expedition stopped at the Willaston Hotel on 19th January 1863. The South Australian Register reported-

“A little before 10 o’clock Willaston seemed to be the centre of attraction and thither, the crowd repaired. On arrival there the explorers were seen getting ready their saddle and pack horses, which being concluded they and a number of the gentlemen of Gawler assembled in the large room of Mr. Poole’s Willaston Hotel where a substantial luncheon was laid out.”

Unfortunately, Stuart was not in attendance, due to ill health. The party then left the hotel with a full procession, including brass bands, which stretched for a quarter of a mile. The party camped at the Little Para, where Stuart joined them. They then proceeded into Adelaide on the 21st January 1863 to a heroes welcome, with crowds lining the streets and celebrating with a public holiday.

In the booklet “Willaston Revisited: January 1988”, Gerald Carmody reflects on his early life in Willaston, 40 years before.- “As a very young boy, I remembered my grandfather telling me about the horse trough that stood on the foot path outside this hotel. On a Sunday morning (he said) the water in the trough would be red with blood. Bare knuckle fisticuffs were the order of the day on Saturday nights.”

The hotel closed in 1920. It later became a private residence. In 1987 for a short time, it housed an antique business conducted by Frank and Thelma Banister.

Please click here for photos of the first Willaston Hotel. 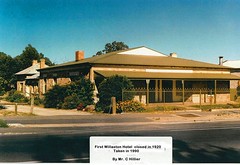 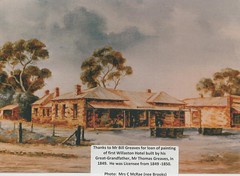 Do you remember Willaston Hotel - First ? Then Join up and add your memory here.

This page was last modified on 5 May 2017, at 16:09.Text on this site is available under the Creative Commons Attributions/Share Alike licence; additional terms may also apply. See our Terms of Use.
About Now and Then | Places | People | Events | Organisations | Things | Contact us